If there is one thing I wish I would have gotten last time I purchased a stereo receiver, it's bluetooth connectivity.  With streaming services supplanting radio, records, and CDs, it seems like bluetooth is the minimum that a stereo system needs to keep up with the times.  The Yamaha R-S202BL offers bluetooth connectivity at a bargain price on Amazon.com. 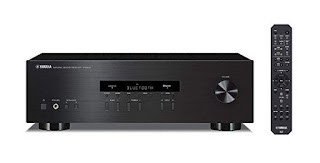 While I'm content to use RCA Y-cables for connectivity for now, bluetooth is definitely something I would look for today.  It has 40 channel presets, 100 watts of power, and 10hz to 100kz frequency response.  According to reviews, it's definitely an entry-level receiver, but if you are looking for dirt cheap, it should fit the bill.  The next step up is a similar receiver from Sony.

Posted by GatorDude at 7:09 PM No comments:

Sometimes Goodwill Thrift Stores can be filled with surprises.  For example, over the weekend, I encountered a pair of medium-sized Technics SB-CR33 floorstanding speakers.  These 2-way 140 watt speakers generally get good reviews and are praised for their bass and high end sound.  Unfortunately, these speakers look like crap.  The speaker covers are filthy. 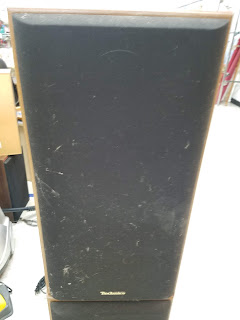 The back of these speakers also features a white mystery substance.  This could be dirt.  But, if it this is white mold, I sure wouldn't want to bring it into the house. 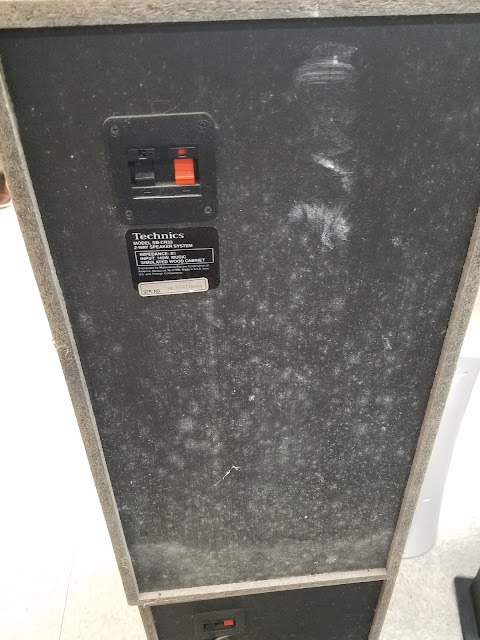 It's a shame, because these speakers actually look pretty good underneath the dust cover.  That said, I suspect that a bit of foam may be missing around the small tweeter speaker. 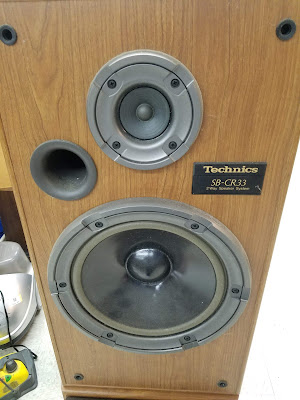 These speakers were marked at only $4.99 each.  However, due to the suspicious stains, I'd recommend passing on them at any price.  If you can get some in better cosmetic condition, they would probably be a great buy.

Posted by GatorDude at 3:57 PM No comments:

It was the start if a familiar story.  I saw her sitting there on a thrift store shelf.  Her speaker cabinets were a shiny ebony that reflected the universe around her. 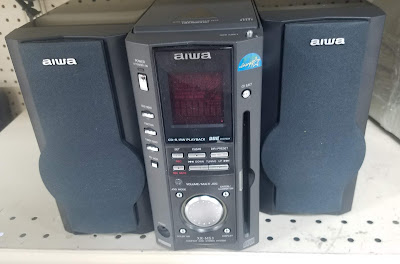 I imagined what the speakers themselves like and gently removed the covers.  There were no flaws, no blemishes, and not even a trace of dust.  She was an Aiwa XR-MS3 Micro Music System. 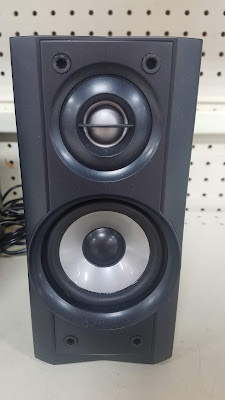 For only $11, she would be a handsome addition to my collection.  I took her to a place of prominence where she could plug in.  She fired up easily and I found her controls easy to understand.
I found a disused Dixie Chick CD laying on a shelf nearby. 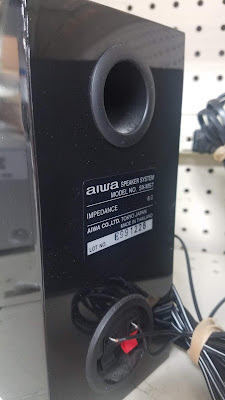 I fed it into the vertical CD slot and with a little fumbling, the Aiwa played beautifully.  Then I switched to radio.  She gamely hunted for a station, but no antenna.  I found a cassette tape and popped it into the top-mounted cassette player. 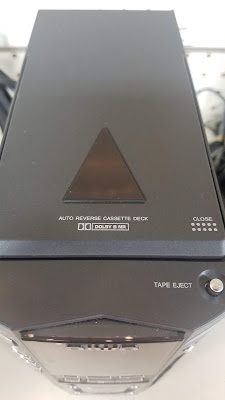 It would not play or wind the tape in either direction.  Next, I peered deep into the fan port in the back and realized that I could not see the fan spinning. 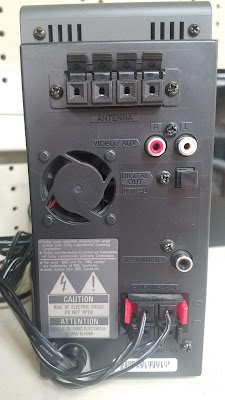 Finally, I remembered Sony system that died on my table.  I sighed.  I could not go through that pain again.  I kept my $11 and walked away.  It was a sweet looking little system and might have worked well for the radio, CD, and auxiliary input.

Sometimes I think the supply of vintage stereo equipment is dwindling in our local thrift stores.  However, I did spot this Bradford ICT FET AM-FM receiver with built in 8 track player recently.  Bradford was the store brand for the Grants or W.T. Grants department store chain.  Grants was founded in 1906 and operated until 1976.  The department stores were a fixture in the downtown area of most American cities. 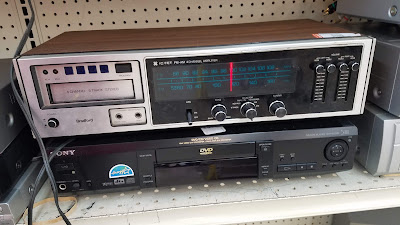 I couldn't test this unit out because it there weren't any speakers, speaker wires, or even headphones on sale.  However, since belts deteriorate over time,  it's pretty unlikely that the 8-track would have worked. 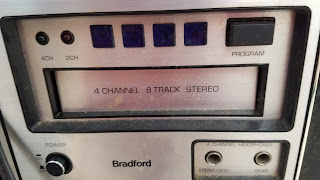 It would have been fun to see the lights glow.  Since the price was around $10, I probably could have picked it up.  But, I don't have any electronics repair skills and I don't have a dedicated workspace. 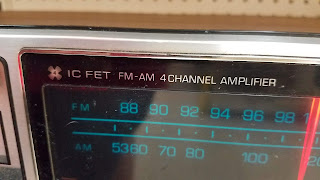 Bradford stereos were made in Japan and mentions in online forums are largely positive.  I'm sure this unit would have had plenty of old school power for an apartment with 60 watts of power. 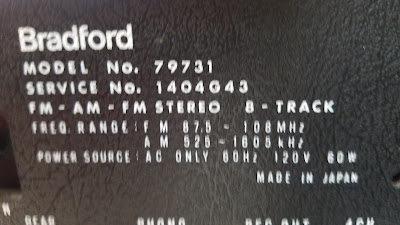 The unit had auxiliary inputs and outputs for speakers galore. 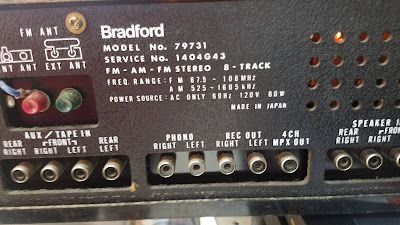 I recently spotted with Aiwa CX-NAJ14 Digital Audio system for only $20 on the shelves of a local thrift store.  It's a nice unit with a CD player, dual cassette, and AM/FM radio receiver.  Aiwa was known for very solid quality and good sound.  For a great Gizmodo article on the Aiwa, check out this article:  Aiwa:  The Almost Great Audio Company. 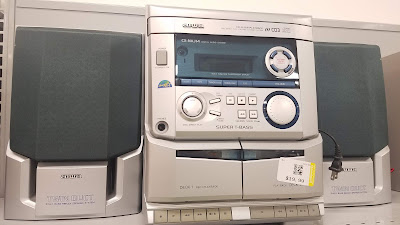 A system like this brings a lot of stereo into a small space.  You've got to test it thoroughly at the thrift store.  But, if it works, you've got something good! 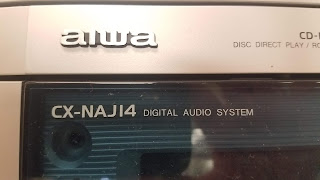 I've recently learned that the Aiwa brand was recently bought by one of Sony's suppliers and will be returning to the market with a variety of new premium products.

Posted by GatorDude at 10:55 PM No comments:

Are You Ready For Amazon Prime Day?

As an audio electronics enthusiast, I find Amazon to be an amazing resource.  You can use Amazon to get the most obscure parts sent directly to your house.  You can find cool gear that is not available in most brick and mortar stores.  Alternatively, you can skip the middleman and order electronics directly from the factory.  But, as great as all this is for Amazon shoppers, Amazon Prime takes it to the next level.

Amazon Prime opens up access to more free and fast shipping options.  It also provides online photo storage, an excellent music streaming service, and prime video with exclusive programming that is unavailable elsewhere.  But, if you really want good deals, Amazon Prime offers Amazon Prime Day on July 15th and extended into July 16th.  The whole day is like a Black Friday sale in July.  You'll get great deals, all day long, on the coolest products.  If you don't want to miss out, you'll want to sign up for prime today!

This just in from the land of orphaned speakers.  Here is a much vaunted Optimus bookshelf speaker from Radio Shack.  It sits all alone on a thrift store shelf. 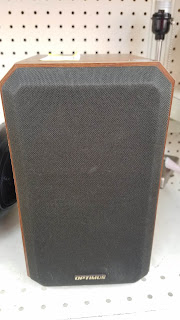 I looked desperately for its matching speaker.  It would have been perfect for the little mini amp project that I was working on. 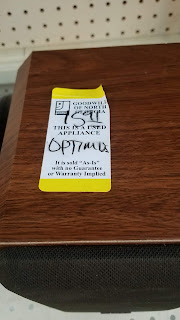 When you remove the front cover, the speakers themselves are immaculate.  They are simply beautiful. 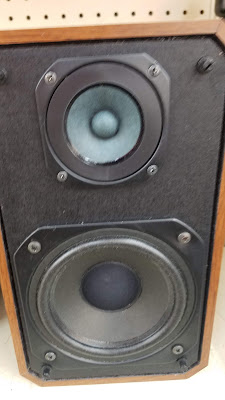 Since these little bookshelf speakers are only rated for 40 watts, they might be a great match for a mini amp.  But, with only one speaker, they just don't make any sense. 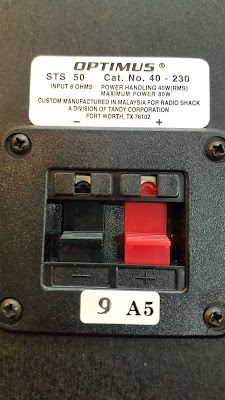